Enter your City name or Pincode

Deogahar is a small city in the state of Jharkhand. It is a beautiful region dotted with various temples, historical monuments and sightseeing attractions. The region enjoys robust transport network which makes it accessible from any part of the country. It is headquarter of the district that came into existence in 1 June 1983. The city is famous for Baba Baidyanath Dham temple which holds an important place in the society and economy of the region. In fact Deoghar has become synonymous with Baidyanath temple. 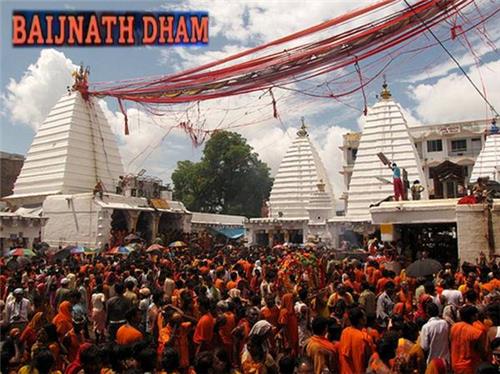 Geography and Climate of Deoghar

Santhal paraganas lies on the west border of Deogarh, Dumka in south, toward north lies Bhagalpur and Giridhi in west. Deogarh has got a very uneven terrain, it has many rocky hills, long ridges with intervening depressions. Deogarh is extensively under a thick cover of forest. Deogarh lies at an altitude of 247 m above sea level. Though the hills are at a much higher altitude like Phuljari at an altitude of 750 m, Teror at 670 m etc. Deogarh is tilted from north west to south east. Deogarh is covered with Chhotanagpur granite gneiss of Archean age and paches of sandstone, alluvium, and shale of Gondawana formations. Ajay, the Paltro etc are the important rivers. the climate of Deogarh can be largely classified as dry. It experiences hot summers and cold winters.

Deogarh is known as the land of temples. There are many temples and other sightseeing locations in deogarh. The two main events namely Shravana mela and Durga puja are also celebrated with great enthusiasm. Baba Baidyanath temple is one of the major attraction of the area. A number of tourist visit Deogarh. The tourism in Deoghar is one of the major economic acitivity of the region.If planning to visit Deoghar then you must drive down to below mentioned destinations that have their own charm and appeal.

Rikhia Ashram: It is a branch of Bihar School of Yoga. It was established by Paramahamsa Swami Satyananda Saraswati and is visited by a number of yoga lovers every year.

Nandan Pahar: Located towards eastern end of Deogarh is a small hill, one of the major attraction for the tourists.

Basukinath : It is a famous Lord Shiva Temple.

Satsanga Ashram: An ashram established in 1946 by Sree Sree Thakur Anukulchandra, is now a major attraction and an holy adobe for the followers of the baba.

Shivganga: It is a water body near Baidyanath Temple.

Deoghar is very famous for Jyotiralinga temple of lord Shiva and the famous Shravani mela hosted every year during Hindi calendar Shravana month. This has boosted the prospects of tourism in Deoghar to a large extent as a large number of devotees visit this temple town of Jharkhand. And hence tourism is one of the major economic activity in the area. The other major economic activity is agriculture & allied agriculture activities. The percentage of population dependent on agriculture is higher. Many people migrate to big cities for their livelihood seasonaly as the as the agricultural activities are rain-fed and monocrop. Deogarh is counted among the backward districts according to the 2006 census. 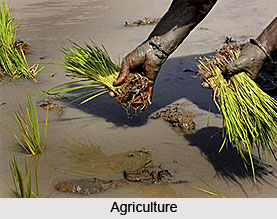 The main agricultural crops are wheat, maize, paddy, pulses & oilseeds. The area remains dry for most of the year and only during monsoons it receives a rainfall of 1200 mm to 1300 mm. the crops grown here are mono crop and rain fed. And hence they don’t give much growth scope to the farmers. Because of the same farmers have to migrate to big cities. Some of the improvements that are urgently required to be taken care in agricultural field are need for increasing the irrigation and multi cropping system. The climate of Deogarh is very suitable for the growth of medicinal plants as well as aromatic plant and Jatropha plants on the wasteland and barren forest land. In recent years vegetables like cauliflower, tomato, Peas, brinjal and french beans are cultivated by the farmers. Horticulture is another important agricultural activity of the area.

A Milk Chilling Plant with a capacity of 10000 lpd is also being operated in Deoghar. Providing employment to number of people of Deogarh. The plant supplies dairy products like curd, lassi, etc. Sericulture occupies many tribal people Deogarh, and is highly unorganized economic activity in the region. Since tassar host trees Arjun and Asana are available in plenty in the forest area. A large number of tribal people residing near forests earn their livelihood from tassar worm rearing.
The total area under forest cover is 20,284 ha. This form a large portion of the total area of Deogarh. A number of people are dependent on forest based economic activities like sericulture, wood collection for fire and other uses like making furniture and many more.

Since the agricultural activities are seasonal in Deogarh and also agroclimatic condition are suitable to support cross bred animals, animal husbandry is emerging as a new economic activity in the area having high scope. There is a large scope for milk and milk products like khoa, Dahi , chhena, and ghee for marketing. Also poultry broiler is mostly breeded for providing meat, feathers and manure.

There are many ponds and tanks and rivers, some seasonal and some permanent that are the source of many kinds of fishes. And hence a number of people are occupied in fishing, these fishes are then sold in local markets and nearby areas.

Committee on Agro climatic Regional Planning lists About Deoghar as a potential ground for horticulture. It is also included under National Horticulture Mission programme which provides incentive to Deoghar to take up plantation activities.

Deoghar is an economically backward district. The main economic activities are agro based and tourism. Though tourism is nicely developed. There is a lot of scope to improve agricultural facilities in the area. People are mainly dependent on natural resources which hampers the agricultural production. Also there are no industrial development in the area.


Events and Festivals in Deoghar

The most famous event or festival celebrated in Deoghar falls during the month of Shrawan. During this time number of devotees visit Baba Baidyanath temple. They first visit Sultanganj, about 105 km from Babadham, after collecting water in their kanwars they walk to Baba Baidyanath temple at Babadham carrying kanwars on their shoulders.

Deoghar is connected to all the nearby major cities by road like Patna, Ranchi, Bhagalpur, Calcutta, Munger etc. The religious town has two railway stations, Baidyanathdham (BDME) and Deoghar (DGHR). One can reach Deoghar via airways through Patna (PAT), Kolkata (CCU) or Ranchi (IXR). The nearest airport is Patna.


Deoghar at a glance

Are you a Business Owner?

Add the products or services you offer