Enter your City name or Pincode

Art and Culture of Deoghar

Deoghar is also known as "Baidyanath Dham", "Baba Dham", "B. Deoghar". Deoghar or Devghar can be split into two word “dev” + “ghar” meaning house of Gods. Deoghar is one of the 51 shaktipeeths and one of the twelve jyotirlingam. Deoghar is famous for Baba Baidyanath Temple which is dedicated to Lord Shiva . It is one of the holy pilgrimage of Hindus. A lot of people visit Deoghar to indulge in pure and serene spirituality of the town. Being a pilgrimage destination majority of the people residing here are Hindus. In other words Hinduism is dominant religion of the town. 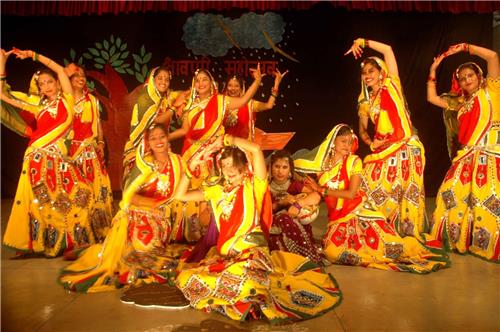 Most of the crowd here is Hindi speaking followed by Maithili and Maghi. Deoghar is a land of art, Handicraft, festivals and a lot of traditional dance and music. The stone carvings, woodcrafts, bamboo items, metal works and ornaments and jewelry work of Deoghar is very famous among tourists and has gained international acclaimed for its uniqueness. The Shravan Mela, Shivratri mela and many other festivals and fairs are celebrated with lot of enthusiasm and joy. Both men and women perform traditional dances and music to show their joy and happiness.

Hinduism and Jainism are the two major religions in Deoghar. Other religions like Islam, Christianity and Sikhism is also followed by the people of Deoghar. Hindi is the prominent languages spoken in Deoghar. All the advertising and media are done in Hindi only. Hindi is spoken and understood by the majority of the people. Maghi and Maithili which is written in the Devanagari script is the second most prominent language spoken here.


Art and Handicrafts in Deoghar

Deoghar is famous for its stone carvings, woodcrafts, bamboo items, metal works and ornaments and jewelry. This largely consists of tribal handicrafts. The most famous of Deoghars art and craft is done by the Tribes residing nearby. There are several groups of tribes that are found in Deoghar. These tribes are rich in the wealth of their tradition of crafts and arts. These tribes are very skilled and have an amazing sense of creativity which turns the raw materials into precious artifacts. The Paitkar style paintings are a big craze for the people. They are one of the most beautiful art form by the people of Deoghar.The beautiful ornaments and metal works are a craze among the female tourists. Stone, bamboo and wood sculptors and idols of lord Shiva and other gods are beautifully carved by the magical hands of the crafts person of Deoghar.

Festivals are one of the best time of experience true Deoghar. Shravan Mela is one of the major festivals of Deoghar. Number of tourists from all over India visit Deoghar during Shravan Mela. Shravan is a month of the Hindu calendar. Shravan Mela festival comes in July and August. The festivals starts with collecting holy water of river Ganga from Sultanganj. People wear saffron clothes as they are considered pious. The festival commences on Monday which is considered as a holy day of Lord Shiva.The water collected from River Ganga is sprinkled over the Shiva lingam. The water is collected in two jars hung by two sides of a stick and carried on shoulders it is kept in mind that jar should not be touched to the ground.

The followers of Sri Anukul Chandra gather at Satsang Ashram near Deoghar to celebrate a festival in the month of Kartik – a month of Hindi Calender. Apart from these three important fairs, namely, Shivaratri mela held in March, Shri Panchmi mela held in January, and the Bhadra Purnima mela held in September are also celebrated with great joy and enthusiasm. Shivaratri mela is one of the most famous and chesrished festival celebrated attended bylakhs of people from all over the country. Always remember to have a pre booking in any hotel or lodge if you plan to visit Deoghar during any festival especially shivratri Mela.

Jhumar is a demonstration of the happiness of the tribal people during the harvesting season. Janani Jhumar is a female version of the Jhumar dance, marking of the harvesting season during the monsoon. Men also join in the dance occasionally. Janani Jhumar is accompanied by song and music including musical instruments like mandar, dhol, kartal, bansuri and sarangi. Mardana Jhumar is performed by the men with swords. It can also be considered as a form of martial art. It displays the valor of a man. one or two female dancers known as ‘nachnis also join in the dance sometimes. It is performed on loud music including instruments like the shehnai, dhol, nagara, jhanjh and kartal.

Paika is a form of martial arts mixed with local dance steps. It is performed by the male members costume for it includes safety chest plates and head wears for their protection. It is performed on melodious music of Narsingha, Shahnai, Bheir, Dhak and Nagara drums. It is performed during festivals and weddings.

Phagua is a male dance performed during Holi. It involves a series of joyous dance movements accompanied with throwing colored water and powder during the dance. it is performed on folk music called Phag which is produced by huge drums, locally known as dhal.

Chhou Dance is a night time dance performed in open spaces. The dancing area to curb the darkness is surrounded by the torches or fire poles called the mashaals. It is mandatory to take a bath and to do puja before performing this dance style. This is done to keep the spirituality of the dance as it involves people dressed as various Gods.These dances are performed on the stories of Ramayana and the Mahabharata. The music to this dance form is given by traditional nagada i.e. the drums, and the flute. Chhau dance is divided into three types - Mayurbhanj Chhau, Saraikela Chhau and Purulia Chhau. This dance form being very tough has gathered huge applauses world wide.

Are you a Business Owner?

Add the products or services you offer